What began as a response to a specific issue has resulted in a new, radically simplified modular master contract, which has now been  globally deployed for all of IBM's offerings, including Cloud, Machines, Appliances, Software and Services. 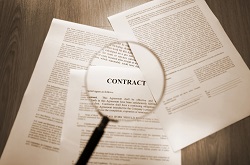 Reusing contracts originally designed for IT services and software meant that contracting for cloud services was slower and more complicated than desired. Adding Cloud Services to an existing enterprise contract often required lengthy client reviews, and adding new clients required negotiating contract terms related to hardware, software or traditional services even if the client was only buying Cloud services.

A small project team of lawyers and contracts professionals throughout the organization was tasked to produce an industry-leading, radically-simplified contract for all of IBM's Cloud Services. Existing contracts and clauses would not be reused.  To avoid complexity and to simplify the review process, all terms and conditions would be in the base contract. No other terms would be cross referenced or embedded using hyperlinks. To minimize negotiation, the terms and conditions would meet the requirements of most enterprise clients, and would be competitively benchmarked.  Although only a small number of professionals did the drafting, the collective expertise of the IBM legal department was leveraged. In partnership with a sales transformation team, the project team led the internal business and operational reviews needed to fully implement the new agreement company-wide.

Supported by the company's most senior executives, a new, simplified, two-page plain language Cloud Services Agreement (CSA) was delivered that met all the requirements.  In less than two months it had been translated into approximately 20 languages and deployed globally allowing clients to order any of IBM's Cloud offerings. Custom services such as installation, integration or customization services could be ordered without requiring any other contract. Over 80% of the CSA contracts have been signed without negotiation and when negotiation is required the time to close has been drastically reduced.)

Based on the positive market feedback regarding the simplified CSA, IBM has extended the simplified contracting approach beyond Cloud services, and now has a short, simple, modular master contract based upon the CSA, which applies to all of IBM's offerings, including Cloud, Machines, Appliances, Software and Services.